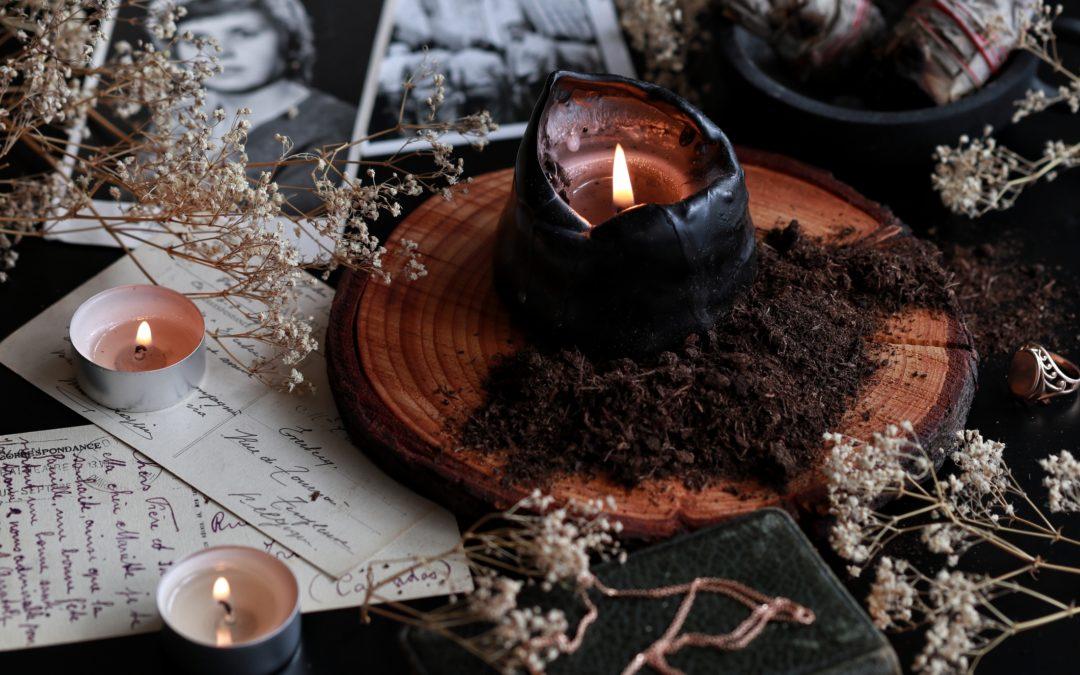 The Spiritual Origins of Halloween

Do you ever wonder why we dress up in scary costumes and go trick-or-treating on Halloween? What has become one of the most popular party holidays of the year was once a sacred day to honor our ancestors.

Halloween, or All Hallow’s Eve on October 31, is part of a three-day observance of Allhallowtide--a time set aside to remember the dead, saints, martyrs, and other faithfully departed. In the Catholic religion of my childhood, that meant attending church on All Saints’ Day (November 1) and All Soul’s Day (November 2) to light candles and pray for the souls of the deceased.

But this tradition did not start with Christianity. It goes back to pagan times, when the Celts celebrated Samhain at the end of the harvest season. They believed that fall was a time when the doorways to the other world opened, allowing supernatural beings and the souls of the dead to come into our world.

During Samhain, people wore costumes representing the pagan gods or fairies and went from house-to-house receiving offerings on their behalf. They also burned bonfires representing the sun to inspire growth during the cold winter months.

You can see the remnants of this tradition around the world in celebrations like Mexico’s Day of the Dead, when families visit the gravesides of their ancestors armed with colorful decorations, flowers, candles, and a ceremonial feast meant to encourage visits from the souls and ghosts of ancestors.

Dia de Los Muertos is a joyful holiday with roots in an Aztec festival dedicated to the goddess of the afterlife and underworld. The colorful decorations are meant to encourage visits by the souls and ghosts of the ancestors so they can hear the prayers and wishes of the living.

Other countries and religions have their own traditions to honor the ancestors, from China’s “ghost month” to Guatemala’s Festival of Giant Kites, where locals gather to fly enormous, extravagant kites in honor of loved ones.

What is interesting is the underlying idea that ties all these cultures together–the belief that we can commune with our ancestors during this specific time when the veil between the worlds is thinnest.

I recently took an 8-week course Turn Your Grief into an Affirmation of Life:  How the Mexican Day of the Dead Tradition Helps You Make Peace with Loss and Embrace Your Future with Grace.

The teacher, Grace Alvarez Sesma, a descendant of the indigenous Mayan people of Mexico, has been walking the path of the curanderismo since she was six years old. She shared with us the history, traditions, and ceremonies of her people. She taught how they became intermingled with the traditions of the Spanish conquistadores and the Catholic Church to become the hybrid that is today’s Day of the Dead.

One of the important lessons I took away from the course is the importance of not appropriating the teachings and traditions of another culture. It is perfectly acceptable to appreciate their traditions, but unless you are a descendant or have apprenticed with a teacher from that culture, you should not be claiming its traditions as you own.

Personally, I sometimes find it difficult to draw the line between appreciation and appropriation. Grace explained it in a way that made sense to me. It is appreciation to study with a master teacher who agrees to share their cultural traditions so that you can help preserve them and pass them on. If that has been done with intentionality by both teacher and student, you can use your knowledge to pass the teachings forward.  But it is not okay to pass yourself off as a shaman or medicine practitioner from another culture just because you have read books and studied their traditions.

When it comes to clothing, it is appreciation to purchase and wear a beautiful hand-crafted blouse, sari, or necklace from a native of the culture. But it is cultural appropriation to dress yourself in costume as an indigenous person for Halloween.

So what does that mean for rituals and ceremonies? Grace suggested that we should try to draw on the traditions of our own ancestors when deciding how to honor our ancestors. For example, many countries have traditions of creating altars to pray for the souls of their ancestors. But as much as you may love the colorful masks and costumes of the Dia de los Muertos, unless that is your own culture, it is probably best not to fill your altars with them.

People of Western European descent, who were the colonizers of many indigenous peoples, might have to look further back in history to find ceremonies that are more suitable. For example, many of us have ancient Gaelic or Celtic ancestors, so we might want to borrow from those traditions. I recently discovered that I have some Irish and Scotch blood mixed in with the English and French, so I am exploring that for myself. I am sure the same exists for people of Jewish, Asian, and other cultural heritages.

Following Grace’s guidance, I created an altar for my ancestors who have passed in the previous year–my mother, my godmother, and a favorite cousin. In honor of our Catholic heritage, it is adorned with angels and candles. There is a Celtic cross from my ancient lineage, and some crystals from more recent spiritual learnings. On November 2, I will light the candles and pray for their smooth transition. I will invite them in to share any messages they have with me and tell them that I honor their legacies.

Writing Prompt: Writing with the Ancestors

Another great way to connect with the ancestors is through a process known as somatic or intuitive writing. To do this, you don’t have to subscribe to any particular religion or belief system. All you need to do is let go of your logical mind and let your intuition guide you to answer the writing prompts.

It helps to get in touch with your heart and body before you begin. Simply take a few deep breaths, feel yourself grounded on earth, and allow your heart to fill with white light. When you feel grounded, connect with the spirit realm in any way that feels natural to you. You may want to call on your angels or guides, the spirits of your ancestors, or your Higher Self.

Once you feel the connection, you can ask your questions and write without lifting your pen from the paper for 3-5 minutes. Don’t censor yourself or try to make sense of what is flowing through you. Just automatically record what pops into your head. It may be in the form of images, voices, or just a quiet knowing.

Here are two gentle questions to get you started: